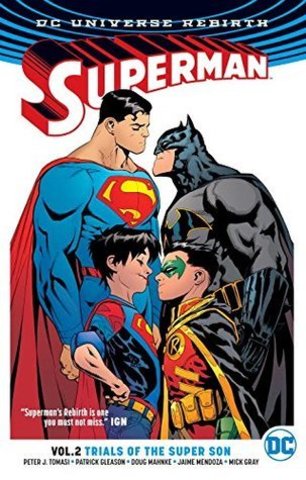 After fleeing the destruction of his universe and beginning a new life on a similar yet strangely different Earth, Superman has reclaimed his title as the most powerful hero on the planet. At the same time, he and his wife, Lois Lane, have begun helping their son, Jonathan, to harness his own emerging abilities. For this extraordinary family, there’s no such thing as down time.

And that’s probably for the best, given the company that they keep. Sudden trips to Dinosaur Island, or chance encounters with Frankenstein and his black-hearted bride, for example, are just business as usual for the Man and Boy of Steel. A far greater challenge, however, is the the Dark Knight Detective’s newfound forensic interest in these strange visitors from another world—and Superboy’s potentially explosive rivalry with Robin, the Batman’s own offpsring.